For this year’s final maunder, I thought I would travel down a short path populated by Christmas music and “Listmas” music, which are actually one in the same. That’s to say I’m joining in the merry blogging tradition of Listmas, whereby one posts various lists in December (all in the name of easy reading, because it’s too easy to get bogged down during the holidays), and posting here a list of Christmas music. Because it is finally THAT time of year; and, I must admit, that with as loopy as life as been of late, I have been chomping at the bit to find comfort in my personally-chosen collection of holiday tunage.

But this isn’t a list of favorite Christmas music, most cheery Christmas music, or Christmas music I would like to see banished from the airwaves. No. Instead, I’m re-invoking the spirit of my Five on Shuffle posts and will be listing here the first five songs that randomly play on a Pandora playlist titled “Swingin’ Christmas Radio.” If my festive moments happen to be populated with Pandora-ing, “Swingin’ Christmas Radio” is my preferred playlist, as it offers mostly old standards interspersed with new interpretations of a wide variety of holiday songs. And, since it’s still early in terms of Christmas-y activities, this actually marks the first time I’ll be firing up the playlist since last December…or January, since, y’know…I like Christmas music a little too much, sometimes. So I’m very curious as to what songs will pop up. Will they be the ones that might make your ears bleed while shopping in Macy’s? Or will they be the ones you can’t wait to having playing while sitting by a warm fire with a mug of hot chocolate? Let’s find out!

“Home for the Holidays” – Perry Como 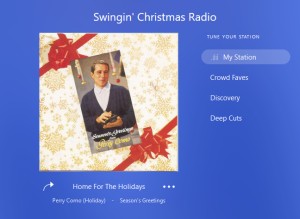 Between you, me, my cat, and the wall, I have a secret habit of singing while cooking. I profess no more vocal ability than the next person, but it is a habit that I can’t seem to shake. And around the holidays, you might find me (though you won’t) lightly singing “home for the Holidays” more than just about any other song. Not only is it immensely catchy, it’s very easy for me to remember its lyrics. Plus, there really is no place like home – whatever happy place you call “home” – during the holidays. 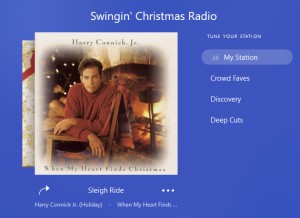 I like Harry Connick Jr. in principle, but not so much in practice. Nothing personal, but his musical catalog isn’t one that permeates my daily listening fare. But he does have some damn fine renditions of holiday favorites. Though…I’m not one hundred percent sure that I’m completely onboard with his big and version of “Sleigh Ride.” I mean, there’s not even a single sleigh bell in it! And yes, that’s me being unreasonably picky. Musically, the song is fun and fine. Though, can we talk about this album cover? It’s not right…right?

This is a cute song, but I have to admit that I’m sure how to feel about it in this day and age. Co-opting the Hawaiian language might read as a little offensive today, but listening to the song doesn’t feel nearly as icky as it does with others that haven’t aged well. I mostly remember this song from my days of piano lessons and trying to learn it from a large book of Christmas sheet music that we had. I was never great at piano, and that’s because I found it difficult to play songs that I hadn’t ever heard before. And I never learned “Mele Kalikimaka” for that very reason. I didn’t I heard the song in full until much later in life, and by then, my piano days were far behind me.

“We Wish You a Merry Christmas” – Bing Crosby

Back with more Bing, eh? Despite my flippancy in that second paragraph, I’d be hard-pressed to come up with a full list of Christmas songs that I utterly despite. (I can tell you that the ones about a hippopotamus and donkey are on it.) But if I were to make a list of Christmas-songs-I’d-rather-pass-on-if-I-had-the-choice, “We Wish You A Merry Christmas” would be on it. It’s one of those holidays songs that I sang way too much during my choir/chorale days, and one that has just always sounded musically bland and uninteresting. And no amount of figgy pudding can change that. No. Amount.

Well, I suppose I shouldn’t be too surprised that Bing, yet again, rounds out this list. It just wouldn’t be the holidays without him, I s’pose. Anyway, in stark contrast to my personal experience with “We Wish You a Merry Christmas” lies this song, “Santa Claus is Comin’ to Town,” which is a lifelong favorite no matter how many times I’ve had to sing it. It was an especially popular song with my grade school choir. And more often than not, as I’m bopping around my kitchen, this is just as likely to pop into my head as “Home for the Holidays.”

And there we are. Full Circle. Full Stop. And Happy Holidays. 😊🎄