Welcome the next installment of my year-long look back at a decade defined by its extremes. Rap versus grunge; mullets versus pixies; Saved by the Bell versus NYPD Blue – the 1990s had it all, and then some. Every other week I’ll be reminiscing about some facet of the 1990s, potentially drowning in some ill-forgotten nostalgia despite my best efforts otherwise. Serving as inspiration is an utterly ridiculous but nonetheless intriguing list created by Huffington Post — 1990 Things from the 90s to End the Nostalgia Once and for All – and I’ll be using a random number generator to pick each week’s “topic.” So don’t have a cow, man, if I ask you to talk to the hand while take this sweet ride through the 90s. Word to your mother. 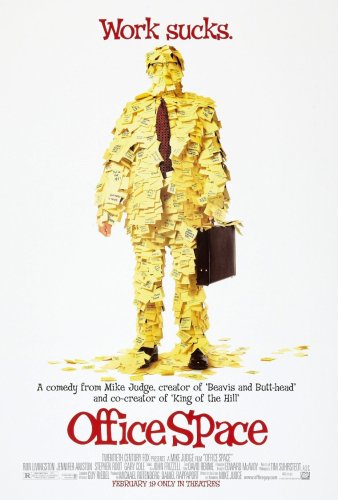 Released in 1999, I’m pretty sure I didn’t see Office Space until I rented it from the video store about a year and a half later. Even then, to my eye, it didn’t pop as a “90s flick,” other than, perhaps, through the available tech of the time. Much like with Idiocracy, Office Space is about as timeless as a movie gets.

Pre-Office Space, my young visions of being an office drone were based primarily on what I’d seen in Working Girl. That, if I ever I fancied working a big, downtown building, I’d be rushing around trying not to be late, would have my own cubicle, computer, and phone, and I’d do the same something every day from 9am to 5pm. And that would be my life.

I guess it would come as no surprise that I actively avoided “office work” for most of my immediate post-college years. For a long time, I saw my diversion into theatre work as freeing. I wasn’t pinned down to a desk; I didn’t have to talk to customers or clients; I didn’t have to file paperwork, or actually do any paperwork. Seeing Office Space — a genuinely astute and witty/silly satire with a few decently cringy moments — for the first time only reinforced that I had made the right choice in life. To me, “TPS reports,” “downsizing,” and “a case of the Mondays” (I had Mondays off, ha!) were completely hilarious things that I doubted would ever infiltrate my daily being.

After a long road up the non-profit cousin to the corporate ladder, I now have my own office (at least it’s not a cubicle), my own computer into which I must type things, and my own phone, which I must answer with a cordial introduction that’s become so habitual, I occasionally and accidentally answer my cell phone in the same manner. I don’t have TPS reports to create and file, but I do owe lots of different documents to lots of different people. And, as such goes in the saddening state of many non-profits today, I’ve been through more downsizing and turnover than I’d care to admit.

But the funny thing is that my view of Office Space hasn’t changed. If anything, it’s even more hilarious now than it once was, because now, I’m an insider. I am the drone who just wants to get through the day. I am the conniver who daydreams about small ways in which I could cause chaos. I am the upstart who screams at the printer when it refuses to work. I am the boss, though hopefully not one as coldly weird, who must see project through. I am the hoarder who will label all my office supplies and actively hunt down any thieves. I am the person who will readily give the middle finger to company policy, though I’ll do it without actually flipping anyone off, and will, instead, formulate better policies.

I am not, however, the person who will awkwardly stand in line waiting for a chance at cake, because I hate office functions of all kinds. However, I am the person that will support such, because I know that for some people, that cake is the only highlight of their day.

I guess my point here is that life changes and Office Space is really only “Totally 90s” because it came out in that decade. No matter where or how you work, see Office Space for the first time now, or see it again for the umpteenth time. It’s a damn good movie.