Continuing a good thing (or at least, a moderately enjoyable thing), this is my monthly series called “Five on Shuffle” where I attempt to reconnect with my iPod by using it regularly throughout the year and using it only and continuously on “shuffle.” Once a month I’m going to stop at a completely random interval, snap photos of five songs in a row, and then post and write about them here. The writing may be heavy or light, depending on whether or not I’ve anything remotely clever to say about any given song.

Am I mildly embarrassed that I own the soundtrack to Grease 2? Yes. And yet, I make no apologies for it – it’s music is terrible, and I accept that. Mostly. This song…this song, however, “We’ll Be Together,” is pure garbage. Listening to its saccharin instrumentals, cloying harmonies, and generally inane composition, quite literally makes me gag. I don’t hate a lot of things, but this song right here, I hate, irrespective of the movie, which I also hate, just not as vehemently.

A winning “entry” on my playlist to end all playlists®, as I’ve come to learn, there’s nothing not to enjoy when it comes to Starcadian. His “ear movies” jive and groove with their own rhythms – spacy, retro, upbeat, and pure.. His Bandcamp, at least, is totally one to bookmark, if not put on repeat when you’re in the mood for meaningful electronica with a good heaping of apologetically lavish 80s flair.

Christmas-ish (I guess) inflections aside, as well as seeing that our Apple overlords don’t know how to spell everything, this is a powerful song by a powerful singer. Vannelli may not be recognizable here, but if, like me, your parents listened to adult contemporary radio stations during the late 70s and early 80s while you were in the car driving to get new OshKosh B’Goshes from Sears, you may know his hits “I Just Wanna Stop” and “Living Inside Myself.” The title here translates to “A Word to my Father,” and the song is simply lovely. 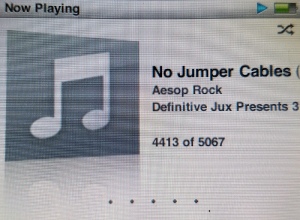 You should know that I might be as musically unhip as it gets. If it wasn’t already painfully obvious, I live in a world of music that, relative to its distance to today’s musical scene, might as well be on Saturn. So I feel like the name “Aesop Rock” probably doesn’t resonate today as much as I think it should, because he’s got your goddamn hip hop right here. Also, this song was on Tony Hawk’s Underground 2, so there, shows you just how cool I am.

And hey, if you like underground hip hop and don’t know about Definitive Jux, look, it has a Wikipedia page, so go now, and listen with knowledge, not coolness. 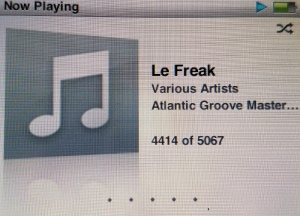 There are songs that have permeated our culture as if we’re bound and gagged to them, like “We are the Champions” wailing at [insert your favorite sporting event], or “The Electric Slide” making wedding guests flail like fish out of water, or literally anything by a band with “Verve” in its name in any context. And then there’s “Le Freak.” It’s a great song, a fun song, a downright funky song, and one that’s almost instantly recognizable no matter if your at a retro party or in the supermarket. And despite it’s pervasiveness, it’s somehow managed to not avoid becoming a cultural virus. It’s impressive, to say the least.