Welcome the next installment of my year-long look back at a decade defined by its extremes. Rap versus grunge; mullets versus pixies; Saved by the Bell versus NYPD Blue – the 1990s had it all, and then some. Every other week I’ll be reminiscing about some facet of the 1990s, potentially drowning in some ill-forgotten nostalgia despite my best efforts otherwise. Serving as inspiration is an utterly ridiculous but nonetheless intriguing list created by Huffington Post — 1990 Things from the 90s to End the Nostalgia Once and for All – and I’ll be using a random number generator to pick each week’s “topic.” So don’t have a cow, man, if I ask you to talk to the hand while take this sweet ride through the 90s. Word to your mother.

I’m figuring that Mr. Green made it on the list as a 90s icon(?) because of his role in the Austin Powers movies, the first of which came out in 1997. And then there’s Can’t Hardly Wait, a forgettable teen comedy from 1998 that starred Jennifer Love-Hewitt so who cared about anyone else in it I guess, and Idle Hands, a now-culty teen horror flick from 1999. But there’s got to be more, right? TO IMDB WE GO!

First off, I gotta say, the dude has been steadily busy in show business since he was ten, and he still seems pretty even keel today, so good for him.

Second, it looks like Mr. Green’s 1990s career started with Pump up the Volume. 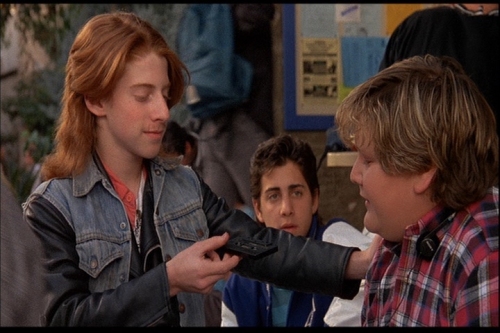 Huh. I’ve seen the movie several times, but Green’s part in it escapes me, even with this image. Then again, it’s a movie worth watching for one reason only, and that’s a young Christian Slater. Hubba hubba.

The next thing that catches my eye is It, the TV mini-series with the always-excellent Tim Curry as Pennywise. Green was definitely in that as the young version of Richie Tozier (to the old version played by Harry Anderson, RIP), and he was really good in it.  And he teetered on being unrecognizable with the thick-rimmed glasses he had to wear. Still, I could see that role jump-starting his 90s career more then whatever he did with a cassette in Pump up the Volume. (I gotta say, though, his long hair in PUtV is totally 90s.)

From there, it looks like he took on bit parts in various TV shows — Evening Shade, The Wonder Years, Beverly Hills, 90210, The X-Files, and Step by Step are among the most recognizable. And he also played roles in a few short-lived series. There’s one called The Byrds of Paradise from 1994, about a single dad moving his family to Hawaii, that rings a very vague bell, like, maybe I remember seeing promos for it way back when?

Looks like he was also in To Gillian on her 37th Birthday (1996). My friends and I were really excited about this movie, primarily because it starred Claire Danes, and we were head-over-heels in love with her vehicle, My So-Called Life. Sorry, Mr. Green – you still weren’t the draw.

From there we get into Austin Power, Idle Hands, and OMFG I FORGOT ABOUT BUFFAAAY!

Holy shit…now I get why he’s on the list. I mean, he was great in Austin Powers as Dr. Evil’s precocious son, Scott, but it was still a minor role, and not one I’d think of as being “of the 90s.” BUT. The hit TV show Buffy the Vampire Slayer that started in 1997? Now that’s a different matter.

Look at me, talking like I know something, right? Well, truth be told…I’ve never seen a single episode of the show, not during its first run, not as re-runs. You see, the release of Buffy happened to coincide with a time in my life where I worked nights. In fact, I missed most prime-time TV of the late 90s and early 00s, and no, you silly fools, there was no DVR back then – recording shows was fucking work. But I roamed with a circle of friends that contained a number of Buffy über-fans who could rattle off plots from the show like they were reciting the alphabet. I can’t say that Seth Green was the prime topic of Buffy-related conversation; most of it seems to revolve around…what was his name?…Zander? Xander? As well as super-cutie-pie Willow.

So sure, more than anything else, Buffy the Vampire Slayer is probably what made Seth Green into something of a household name, at least in the households that adored Buffy, which was a lot of them judging by the high levels of Buffy fandom that still exist today. I’m therefore willing to accept him as a 90s icon, without the question mark.