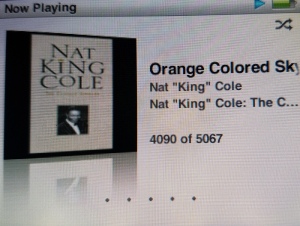 This is one of those songs for which I have an incredibly strong memory, and it has nothing to do with the original artist. Allow me to share:

As a kid, this was one of my all-time favorite segments of The Muppet Show, and it remains so. Watching the setup featuring then-Wonder Woman star Lynda Carter singing this fantastic song among the explosive doings of an oddball cast of (superhero) characters, brings me nothing but the purest joy. It was years before I learned that Lynda Carter was a real super person and super singer in her own right. At this point, she was only Wonder Woman to me.

Muppets aside, it’d be hard to find a more perfect rendition of this classic song than the one done by the classically amazing Nat King Cole. Granted, there are less pyrotechnics at play, but Cole’s cool, jazzy vocals produces nothing less than fire.

Wow, I totally forgot that this song features Papa Roach. But it sure does.

I’ll have you know that I bought Elephunk of my own volition. It was a purchase fueled by a pop void into which I fell during the early 2000s. Something in it spoke to me then, though I’m pretty sure that it wasn’t this song. I mean, the sentiment it expressing is something meaningful, but it’s a middling and forgettable song on an album that otherwise has its fun moments.

Back again with DJ Schmolli! (At least, I think he’s been here before…?) Way back when I was first getting into mashups, DJ Schmolli quickly became a familiar name, and that’s primarily because the site I regularly perused at the time for new songs (then call BootieSF…or maybe it was SFBootie?) featured many of his songs. I recall that this one here, Mista Nasty One Minute, a wonderfully constructed cavalcade of beats and sound, was among the first crop of mashups that I ever downloaded onto my (2nd gen) iPod. Ah…those were the days.

Couldn’t find a video for this one, but thanks to Bootie Mashup, you can listen to it here.

I can understand not liking disco generally, but if you can’t get down with the funky stylings of Kool & The Gang, I’m not sure we can be friends. These sounds are the ones that warm my cold, dead heart. Open Sesame is light on vocals, but it is big on fun, and really, that’s all that counts.

I hate to admit it, but a small part of me will always see the Long Beach Dub Allstars as a lesser Sublime. It’s an imperfection that I harbor in memory, but I just can’t help it. It’s very hard for me to separate the two bands, even though LBDA are incredibly talented, and Wonders of the World really puts those talents on display. This song here, “Lonely End,” says simply, live life, because one day will be your last. A poignant reminder.