1. “Laker Girls Cheer” — from the Spamalot soundtrack by Eric Idle

So here’s a funny case of me having a soundtrack for a musical that I’ve never seen. If I recall correctly, I randomly borrowed a CD of Spamalot‘s original soundtrack (with the delightful-as-always Tim Curry) from a library and quick fell in love with its absurdity. At the time, I think this Monty Python musical may have still been on Broadway, or, at least, it was known to be a popular thing at the time. In any event, the soundtrack is downright hilarious — by the way, the “Laker Girls” here have nothing to do with basketball — so I can only imagine that the real thing is even better.

Y’know, Nick Cave just doesn’t do it for me. And this cover sure doesn’t either. When Metallica goes awry, it really goes fuckin’ full hog, and listening to this actually makes me physically gag. It might be James Hetfield’s creepy transitions into a bad Nick Cave impression that do it. No…just no.

3. Always Something There to Remind Me  – Naked Eyes

Alright, now here’s a cover I can get behind! Naked Eyes’ version of “Always Something There to Remind Me” is about as classically 1980s New Wave as it gets, what with all the synth bells and upbeat drums. But, as the story goes, the song was first written and recorded in the 1960s. I have the Dionne Warwick version from 1963 below, but it didn’t chart. Lou Johnson managed that in 1964. Have to admit that as far as American Bandstand goes, I love the screams in the background for the obviously pre-staged performance. Ahhh, guess it was less about the actual performance and more about being so close to the actual performers. Good stuff, still.

4. I Want Something More – Bad Religion

One of my favorite things about punk music is that sometimes it’s only about the message. The music may or may not be great, but only the message matters. And it if happens to take just 47 seconds to tell that message, all the better. Bad Religion has had some excellent short songs, and this is one of the better ones that’s both musically amazing and still short and to the point. As the masses trudge past, it okay to ask for….nay, demand more out of life.

5.”Lychfield Cemetery” – from the Fable soundtrack by Russell Shaw 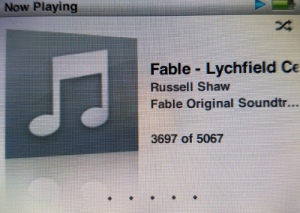 Say what you want about Fable the game; its soundtrack is perfectly stellar. And that’s totally thanks to Russell’s Shaw’s genius ability to compose perfection. And to be fair, if one knew nothing about Fable at all, hearing this intensely sinister song would be enough to conjure up some menacing imagery all the same. That’s not to say that Fable‘s Lychfield Cemetery isn’t kinda scary. I mean, it’s still rife with ghosts and skeletons, but given Fable‘s somewhat goofy demeanor, it’s not like traversing through a legitimate field of horrors. But with the overlay of this particular song, the cemetery’s atmosphere is immediately transformed into an eerily supernatural space where you quickly forget about just how oddly silly its inhabitants look.