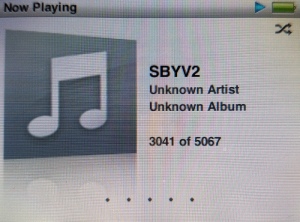 In a land before time, Apple didn’t know each and every album on the planet. (GASP!) As was the case here with Sublime’s Stand By Your Van, a live compilation album. Sure, I could go into iTunes, even today, and fix the track listing, but I’m lazyass who’d much rather just listen to this great tune. Right Back, like a lot of Sublime’s work, is tinged by sadness – this song speaks to being right back where you started, despite any efforts otherwise — but there’s no denying its uplifting beat. Combining both is what made Sublime, well…sublime. 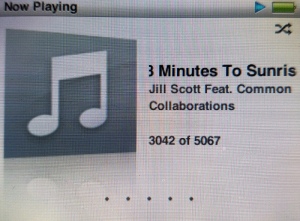 Jill Scott is a-m-a-z-i-n-g all on her own, but why not turn that shit up to one thousand by releasing an equally a-m-a-z-i-n-g album of collaborations? Sounds pretty damn good, as does this particular track. She just makes Common sound good…not that he needs much help in that regard. A mean beat, good flow, and smooth rhythms — even with lyrics that suggest a hard choice may be in order — is a winning combination, no matter how you mix it. 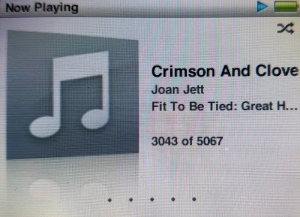 Man, I do love me some Joan Jett. However, I have mixed feelings about her cover of Crimson and Clover. Not that I hate it, it’s more that it doesn’t feel much like a “Joan Jett and the Blackhearts” song. To me it feels more like putting a rock sheen on a 1960s classic. Again, not a bad cover, and Joan Jett is cooler than cool, but it’s never really jived with my ears. (The quieter, more serene version from Tommy James and the Shondells hits the spot.)

Is my iPod trying to tell me something? Like, that I’m not listening to enough Sublime? Oh believe you me, with the way things have been lately, I’d like nothing more than to tune out and tune into Bradley Nowell’s legacy. In the meantime, there’s Mary. It’s a beautiful and intriguing song. You could argue it’s about two young cats just wanting to get their freak on, and…perhaps, *ahem* coming up short. You could also argue that, no, it’s really a song about “mary jane,” given Sublime’s catalog generally. Whatever the fuck it’s about, I’m happy to listen.

5. With One Look – from Sunset Boulevard by Andrew Lloyd Webber

I could have chosen to feature here a classic clip of Glenn Close playing the larger-than-life Norma Desmond in Broadway’s Sunset Boulevard, but…I just like Elaine Page’s voice so much better! Yet, no matter who’s singing, it’s hard to deny the power in a song that’s all about Desmond’s need for it. Sunset Boulevard is one of those 1990s Broadway musicals that I wish I had seen in person. One where whole lots of entertainment laid between spectacle and tragedy.