As with many Bad Religion songs, it’s up to the listener to discern their meanings. “Hello Cruel World” speaks on a number of different levels, and for me, in this moment, it says something quite blunt about the world’s current state of affairs. However, I could also see it meaning something much more insular and personal, particularly since we’re in the midst of graduation season. Whatever it means, it’s a strongly resonant song. 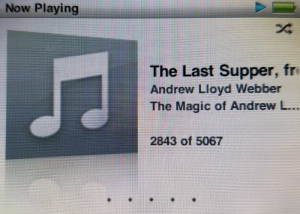 I regret missing that live version of Jesus Christ Superstar that aired recently…the one with John Legend and all. I know I could catch it on YouTube and such, but maybe it doesn’t matter since the 1973 movie version remains my all-time favorite. This song puts on display a fiery and emotional stand-off between Jesus and Judas, and I can’t even begin to describe how incredible it is to watch Ted Neeley (Jesus) and Carl Anderson (Judas) here. I’m sure that John Legend was pretty good at it, too.

Really, iPod? You’re going to do this to me…again? Damn me and my Christmas collection.

“Ring Those Christmas Bells” is a boppy little tune, one that kinda sticks in your head, if you’re so inclined. The funny thing is that with this version, I never remember that it’s Peggy Lee singing. I’m sure I’m not the only one who only associates the sultry singer with seductive tunes like “Fever,” right? But everyone’s gotta make a living, so go on and ring those Christmas bells, Ms. Lee!

Ah, Enya. Quite the singer, no?

And that’s about all I have to say about Enya.

Not that I’m being rude, no, she’s a really good singer. I just don’t have much of an opinion beyond that. I’m not afraid to admit that I’m one of the flash-in-the-pan “fans” who got a kick out of her hit “Orinoco Flow” and decided to pick up her album with the song, Watermark. I like the album, but that’s about as far as my fandom here flies. #sorrynotsorry 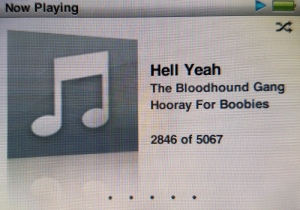 Okay, so sometimes my iPod is the worst. Like with playing all those Christmas songs, and in poorly spacing out The Bloodhound Gang’s “Hell Yeah” with regard to “The Last Supper” from Jesus Christ Superstar. Well…maybe I’ll just focus on the video and its awesome take on John Carpenter’s absolute classic They Live (RIP “Rowdy” Roddy Piper). Also, I really enjoy The Bloodhound Gang, as they fit right in there with my love of Troma movies and stoner comedies. Also, all juvenile humor aside, the band’s front man, Jimmy Pop, is a brilliant wordsmith. #sorrynotsorryagain