Continuing a good thing (or at least, a moderately enjoyable thing) from last year, this is my monthly series called “Five on Shuffle” where I attempt to reconnect with my iPod by using it regularly throughout the year and using it only and continuously on “shuffle.” Once a month I’m going to stop at a completely random interval, snap photos of five songs in a row, and then post and write about them here. The writing may be heavy or light, depending on whether or not I’ve anything remotely clever to say about any given song in the moment.

I feel like I could start each day with a little Bad Religion and never be the wiser. (Or…be all the much more wiser, eh?) For as much as the band has grown and evolved over the years, like with most bands, their early stuff is most telling. “We’re Only Gonna Die” is one such song that readily displays the BR’s charisma and proclivities towards social commentary. It speaks briefly and bluntly to man’s evolution, and as such, it can easily be applied to just about any generation of humanity ever. (This may explains the song’s repetition – history repeating itself and all that.) This is also one of those songs that’s been covered countless times. Because I simply must, I include here one of my favorites. “We’re Only Gonna Die for Our Own Arrogance” by Sublime is brilliant, particularly because it includes the band’s lyrical addition of “we’re only gonna die from our own arrogance, that’s why we might as well take our time. ”

Speaking of covers (yes, there’s a definite theme this month…) Metallica’s compilation of covers, Garage Inc., is as memorable as it is forgettable. By that I mean that I completely forget that I have the album until a song from it rolls around. And even then, half the time it takes me a minute to recognize what I’m listening to. The two-disc set actually contains some pretty good covers, but just because I like Metallica, it doesn’t mean that they get a free pass for everything. Take the classic Black Sabbath tune “Sabbra Cadabra.” The original is fan-fucking-tastic. It’s a hard, cocky song that rock with a great guitar riff that permeates the whole song. Metallica’s version is fine, but it feels fussy and almost too derivative for its own good. It sounds a bit too much like their trying too hard to not apply thrash to heavy metal. But like I said, it’s fine. Even finer, however, may be Black Sabbitch’s version.

For as long as I’ve been doing this whole shuffle thing, I’ve noticed that sometimes the iPod’s shuffling abilities fall into periods of, well…let’s say “unrandomness.” Case in point here as as we had one Bad Religion song, “We’re Only Gonna Die,” followed closely by another here. In fact, there have been times where I’ve ended up hearing the same artist two or three times in a row, or even tracks off the same album one right after the other. The finny thing is that as off-putting as it can be to hear Bach right after Camper Van Beethoven, it’s weirder when things don’t truly shuffle. Anyway, this other BR song, “Mediocre Minds,” is a decent song off a decent album. No Substance represents one of BR’s lesser outings. It’s not a terrible album, but the songs are a little less punk rock in music than lyric. Social and political commentary is kicked into high gear throughout, and it’s all set to a decidedly more “radio” sound than some of their other albums. 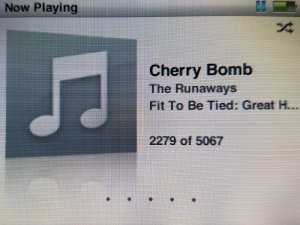 The first time I ever heard “Cherry Bomb,” it was Joan Jett’s version. And I believed it was her song for many years until I learned about The Runaways. Potentially to my discredit, there have been times in the recent past when, upon hearing the original “Cherry Bomb,” I think who’s covering that Joan Jett song? And iTunes is no help, because it credits the song to The Runaways — rightfully so — but then it lists Joan Jett’s greatest hits album Fit to be Tied, as the source, which it is. No matter which version of the song you like — I don’t know that I could pick one myself, because I really do love me some Joan Jett — it’s still a great rock classic.

The most erudite thing I can say about Holst’s suite, “The Planets,” is that it sounds fantastically modern despite its World War I-era dates. The Star Wars-ian among us may also have heard that “The Planets” has served as inspiration to both famed composer John William and George Lucas. (Or was it Steven Spielberg? Hmph, perhaps I’m not as Star Wars-ian as I once was.) While I recognize the song “Venus” from the quite, I more fully recognize that I’ve never actually listened to the entire suite of music, that, as one might guess, contains compositions dedicated to planets in our solar system. Seven planets, to be exact. “Venus,” subtitled “Bringer of Peace,” is a beautiful, subdued, and intricate piece that one might well expect to find in a dramatic movie soundtrack of today.