A gaming update, updated…oh, you get the idea

It’s been a couple months since my last one of these, right? Yeah, I could probably go back and check, but my mind’s set on doing another gaming update regardless, and I can’t say that I have much more to say than that, so…tally ho!

I’m throwing all things Dragon Age together because I kinda threw the two games together anyway, what with playing one right after the other (which is totally the way to go). So yeah, Dragon Age, huh?

Spending extended time with Mass Effect (Andromeda and the original trilogy) early in the year made me curious to revisit BioWare other big set of games involving swords and adorable wardens and dragons. (Y’know, because BioWare hasn’t come out with anything else. Nope nothing else at all. …. …) After starting DA:O sometime in September, a big swath of time opened up in October and the start of November that allowed me to complete both games in short order. I now must admit that as much as I love saving the galaxy with Commander Shepard and her merry band of misfits, Dragon Age has the better story. Don’t get me wrong – the Reapers are serious business! But DA’s writing is better by leaps and bounds. And so much of that has to do with the game’s carefully crafted lore. DA’s world is deep, rich, and fantastical, and there’s simply so much to discover about it. Think you have that sly witch Morrigan figured out? Think again after discovered a crucial part of her past. Think that Knight-Commander Meredith is simply a power-hungry fiend? Think again after Kirkwall’s fate lies near ruin. There are twisty moments in Mass Effect, surely, but few of those twists revolve around the characters. Dragon Age is all about the characters and who they interact with the world and each other. That additional layer make the series rise a bit above that other grand space opera.

Goddamn, if I couldn’t  just go on and on! But I won’t, because I already did in these posts:

The never-ending game project from hell.

I jest, but only a little. Since my previous game projects had only spanned a few months each, I really thought that I’d have Metal Gear Acid in the bag in about the same amount of time. I didn’t expect that recording the game would add so much more time, but I’m stupid and optimistic sometimes, so there. It goes without saying, however, that I really enjoyed the game. I enjoyed it so much more than I expected. So much so that I’d like to continue to explore the Metal Gear universe at some point. (I did download an emulation of Metal Gear Acid 2, but I’ve only just made it past the very lengthy tutorial. Like, it was seriously, and annoying, looooooong.) You can find my officially official thoughts on the game and the recording process here:

Guys, when I started playing the Phoenix Wright games earlier this year, I honestly did not think that I’d enjoy them as much as I have. I mean, I figured that I’d have a pretty good time based on what I had heard about them, but never did I think that I’d become a fan. Well, slap my ass in a blue suit, here I am, a fan. I’ll refrain from gushing like a giddy schoolgirl here, because I already let loose over on Virtual Bastion:

Ace Attorney 3 lives up to its name 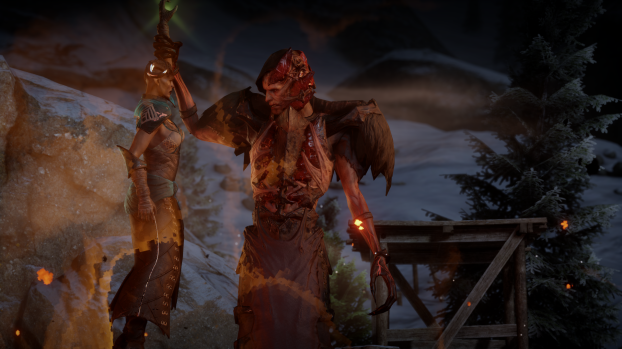 As I think I already explained, after DAII, I picked up the GOTY edition of Inquisition on the cheap for the PC. Within moments of completing the download, I created my brand new inquisitor – a female, Qunari mage – and I set off into the wilds of Thedas, battling demons and all that jazz. If I thought that the experience would be too familiar, given that I’d only completed Inquisition for the first time a couple years ago, I was only partially correct. At this point, I’m more than halfway done with the primary quests of the main game, and while some things have felt too familiar. (why are there so many fucking giants in the Emerald Graves?!) I’ve found lots of new spaces in which to revel. I’ve delved hard into side missions, but plenty remain. My aim has been to take my time and complete as much as I can, and it’s been paying off. While the game’s flaws remain, and there are many, I think my initial attitude towards the game has softened. I’m enjoying most the exploration of lore, which I completely ignored the first time around. In fact, I’m realizing that I ignored so much during my first playthrough that I probably did myself a disservice. I hope to fix that.

Also, Sera. Beez-to-the-kneez if she ain’t the most entertaining companion EVER.

South Park: The Fractured But Whole

Even though I can’t claim to be an avid follower of South Park anymore (I think I stopped watching the show religiously around season 5), I l-o-v-e- the South Park games. Yes, there are only two of them, and I adore them both. However, The Fractured But Whole really hits it out of the park in terms of over-the-top social commentary. The Stick of Truth was a fun send-up of fantasy RPGs set in the world of South Park. The Fractured But Whole transcends “haha, video games” and takes a scathing approach to addressing societal issues at-large, from race relations to law enforcement to immigration.  While a few of the game’s scenarios are a bit on the nose, even for South Park, I’ve been remarkably surprised at a number of the game’s unexpected avenues.  As I near the game’s finale, I already can’t wait to play it again. 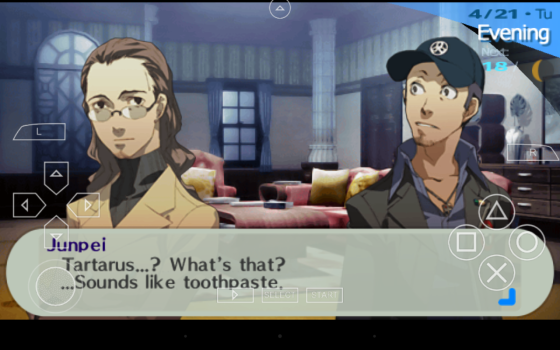 So here’s one from left field, eh? Actually, there’s no grand story here. Having completed my mobile time with both Metal Gear Acid and Ace Attorney: Trials and Tribulations, I was simply looking for something else to play during my commutes. Persona 4 sparked my interest in the Megami Tensei/Persona series, and I once spent a little time with Shin Megami Tensei, but I didn’t really connect with its unusual story. P3 Portable came highly recommended from a number of sources in terms of gameplay and accessibility, so…why not? Nothing major to report on yet, but I am liking it. It’s oddly addicting, as it requires balancing your students’ school/social life with…combating shadows in a giant tower? Yep, that’s what it’s all about.

Grand Theft Auto: San Andreas and The Legend of Zelda: Breath of the Wild 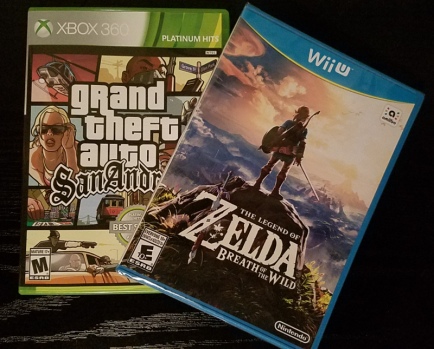 Christmas arrived early this year thanks, in part, to my wonderful husband. “C’mon, you have to play Breath of the Wild, right?” he said to me after watching me pine for the game from afar since its release. I figured I’d get it at some point, of course, but now, I don’t have to because it’s already here! As for GTA: San Andreas…well, that was my Christmas present to myself. Looking ahead into early next year, there aren’t many game releases catching my eye, save for We Happy Few, which is supposed to be fully released (i.e. out of Early Access) in April. Whether or not it will pan out, I don’t know, but I figured that I’d simply immerse myself in DA:I until then. However, now I have options, and two damn fine ones at that! I might take a break from Thedas over Christmas to hit the streets of San Andreas. However, knowing what I know of Breath of the Wild (I haven’t totally been living under a rock called BioWare this past year), it’s extremely tempting as well. Either way, it’s a win-win, I think.

So, yeah. Not too bad considering the time of year. My gaming time this month is has already dwindled down considerably, what with holiday things and stuff and what not. I’ve planned in some extra “me time” here, so my hope is that I’ll be able to catch back up in short order come the new year. I’d like to finish South Park soon, and working through DA:I and all its DLC will likely keep me busy for a few months to come. Deciding what to play next is always burbling in the back of my mind. Fallout 3, Killer7, Bioshock 2, and revisiting the original DisHonored are a few standouts. I’d love to make some decent headway through my Steam library, but so does everyone.  And I might make an actual effort to get through, if not Kingdom Hearts HD 1.5 in full, then at least Kingdom Hearts. There’s also Metal Gear Acid 2, which I would like to play, but I think P3 Portable will take precedence.

[sigh] Hard to believe that 2018 is just around the corner. Seems like the mantra “too many games, too little time” will remain my mantra throughout.