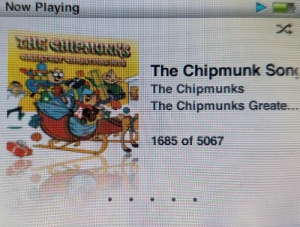 When I started this whole “Five on Shuffle” thing, one of the issues that worried me a tad was that I would have to give up my annual tradition of using my iPod to listen to only Christmas songs from the day after Thanksgiving to New Years. Now that this time of year is actually here, I can’t say I’m all that upset, as I’ve actually been listening to Christmas songs all year already! Anyway, apparently my iPod knew of my dilemma, and it was kind enough to give me a little taste of the holidays again, here with the you-either-love-it-or-depise-it ubiquitous holiday hit from The Chipmunks.

God, I do love me some Pennywise. Melodic, hard-hitting, socially-imbued punk just doesn’t get any better than them. I mean, duh, Bad Religion and all, but there’s something especially infectious about Pennywise’s raucous music. If you don’t know the band, then look no further than this, their self-titled debut album, as the place to start. “Come Out Fighting” is a fantastic track, one that has all that classic Pennywise energy.

3. All Good Gifts – from the musical Godspell

It was around the time that I developed an obsession with Hair and Jesus Christ Superstar in college that I discover their less-known, even-more-hippie cousin, Godspell. I had a hard time accepting the televised version, featured here, because it seemed so very dated. But, I still enjoyed the music, no matter it’s religious, near Bible-thumping slant. Years later, I had the privilege of working on a theatrical production of Godspell – I’ll never forget just how wonderful a cast we had. “All Good Gifts” is but one highlight from the musical.

I have to ask: when it come to pure, unadulterated heavy metal, does it get any better than Iron Maiden? I really don’t know that it does. Because no other band has Bruce Dickinson. He’s such a fuckin’ beast of a vocalist, with a voice just rises over the guitars, bass, and drums to beautifully. Just…damn. Anyway…”The Clairvoyant” is one of Iron Maiden’s classics – instantly recognizable from their album Seventh Son of a Seventh Son (1988). Also, this video. Plastic pants for everyone!! 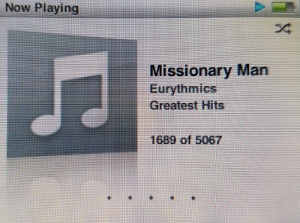 A much as I want to be David Bowie when I grow up, I also want to be Annie Lennox. Speaking of incredible vocalists, she’s one of the all-time best. I l-o-v-e- her work with The Eurythmics, and “Missionary Man” has been a perennial favorite ever since I saw its video ages ago on ye old MTV.

True story. During my club days, we used frequent a place that had drag shows on the weekend. There was one queen who always performed this song, and she was utterly amazing to watch. To this day, I continue to associate this song with that performance.