1. Joy to the World – Cathedral Brass and Choir

Haha, another Christmas song. Well, what are you gonna do. As I mentioned in last month’s post, I have a a lot of ’em, so…yeah. Somewhere I remember reading that “Joy to the World” was something like the most published song ever, or maybe the most performed song ever. Something to that effect. It’s popular. Not to surprisingly, I couldn’t find a video of the Cathedral Brass and Choir performing the song, so this most classic version bt the Mormon Tabernacle Choir will have to suffice.

A long time ago, in a galaxy far, far away, I lived in the San Fransisco Bay area. It was there that I was introduced to undergound hip-hop and turntabalism — folks like Atmosphere, Brother Ali, Invisibl Skratch Piklz, RJD2, and the fellow we have here, The Grouch. Unfortunately for me, my venture into this music at the time was only skin deep. But, I remember finding a music download site, which, at the time, was surely above ground and not at all illegal, that had a bunch of tunes from The Grouch and others. So why not grab a handful a see what happens?, I thought. And I did. Unfortunately, again, I never immersed myself in The Grouch’s music as much as I did with others (Atmosphere, RJD2). My bad, surely. 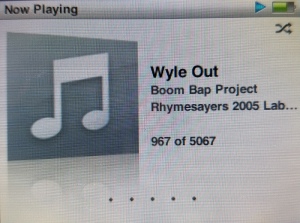 Speaking of Atmosphere and Brother Ali, ooo, I do love me some Rhymesayers. Little did I know that a little sampler CD from this hip-hop label out of Minneapolis, Minnesota, could open up an entire world. Indeed, Atmosphere’s 2005 release, You Can’t Imagine How much Fun We’re Having, came with a bonus disc containing a few song from other Rhymesayers artists, such as what we have here, Boom Bap Project. I’m not entirely sure if the group is still around, but they are still listed on the label. Regardless, they one of many who know the art of hip hop.

I don’t even know where to start. And even if I did, I wouldn’t get much past the embarrassing memories of how obsessed I was with this particular diddy, which include teaching myself this silly little “dance” that goes along with the tune. So I’ll just say, I love this song. It marks a moment in radio time when artists could knock down the all-time greats with gimmicks. Insanely catchy gimmicks, but gimmicks nonetheless. If you happen to know Was (Not Was), well, the you know that “Walk the Dinosaur” wasn’t the strangest recording they ever made. But it sure did put them on the pop culture charts for ever and ever.

5. Since You Been Rosenrot – Kelly Clarkson vs. Rammstein

Of all the weird mashups I have, this one might be the most controversial. I say that in the “either you tolerate it or hate it with all your might” sense. Now, I happen to like the song, and I’m neither a fan of Clarkson nor Rammstein. But the most common reaction I get to this song is “it’s awful.” And the thing of it is that no one ever tells me why except that it “sounds bad.” And it does, I’ll admit that. But there’s something oddly right about its all-out dissonance. And that’s credit to DJ Schmolli’s abilities, because I sure as hell would never, ever listen to these two songs and think to mash them together. But he did, and for my ears, it works.