My gateway into electronica began with The Prodigy. But it didn’t start with their beginnings, which well…isn’t this album here, Experience Expanded, but it’s close. No, I didn’t know the band existed until their third album, The Fat of the Land. Their addictive and vindictive hit “Breathe” ensnared me from the get-go. And once I had sufficiently laid that album threadbare, I dived down the rabbit hole. Experience Expanded isn’t as memorable for me as the band’s other offerings. It plays out like a hyperactive ferret at a rave. (And where’s that Pixar movie, huh?) It bounces between sounds and never settles. That’s not to say it isn’t great, but hearing it definitely transports me to a very particular and somewhat dated mindspace full of big pants and tall shoes. This song, “Hyperspeed (G-Force Part 2),” is rollicking good fun though.

Now where the hell’s my glowstick?!

It’s rather fitting that Freestylers should follow The Prodigy, because if I hadn’t discovered one (The Prodigy), I likely would never have discovered the other. And oh my god, I cannot imagine my life without We Rock Hard. Hell, it’s the album that got me through grad school with its pumping dub rhythms and rhymes and gorgeously technical breakbeats. Every single song is a winner here. So sure, how about “Warning?” Yes, please. Yes, all the time, please! 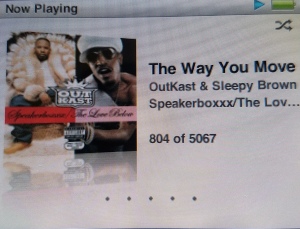 I like OutKast. I mean, I like them well enough, and I think they’re good at what they do — producing slick, catchy, and mostly accessible hip hop — but I don’t actually own any of their albums. (Well, I do roundaboutly, I guess, as my husband has a couple of their early ones in his CD stash.) I’ve no idea why I picked up “The Way You Move” one day from the iTunes store. It was probably stuck in my head or something. It’s no “ATLiens,” but it’s alright.

Oh, Motörhead. There’s plenty of great thrashy, visceral, punk-laden metal out there, but I mean, c’mon…can you really get better than Motörhead? (Please convince me otherwise.) For anyone curious about that name, Headgirl…what would you call it? I guess collaboration fits, though maybe it doesn’t. It was something of a team-up of Motörhead and Girlschool (an A-MAZING band). So this is a cover of Girlschool’s “Emergency” by Motörhead, and it…isn’t? Well, fuck categorization. It’s awesome. 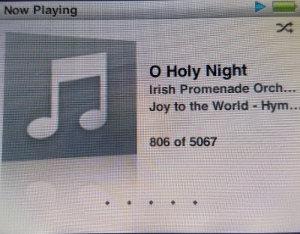 I wondered how long it’d take before a Christmas song showed up here. What can I say, I like Christmas-y music, and I possess quite a bit of it on the ol’ iPod. One of the odd thoughts that I had when I started this project was that I’d probably be really annoyed with hearing Christmas music out of season. Turns out that I don’t mind it all that much. I couldn’t find this particular rendition of “O Holy Night” from the Irish Promenade Orchestra in video form, so the video below will have to do. I will say that is one of those holiday songs that I really only like when sung by a chorus. Pop versions of the song (or operatic pop version a la Sarah Brightman) just do don’t for me.