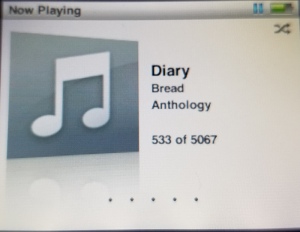 Just because my musical tastes tend towards “loud” and “ostentatious,” it doesn’t mean that I never take pleasure in the rich, plush tones of something quieter. That’s where a band like Bread comes in. They enjoyed a fairly widespread rise to fame in the early 1970s, but were little more than a fading memory by the end of the decade. (Re-releases of their greatest hits have kept them on the recent cusp of easy listening.) For me, Bread is all about vocalist David Gates – his voice resonates just so perfectly. “Diary,” which I think was something of a hit for the band, is a wonderfully melancholic song about unrequited love. 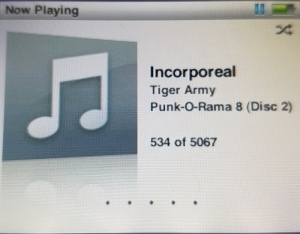 Need some good ol’ psychobilly in your life? Look no further than Tiger Army! Here “Incorporeal” is a fine example of what the band is all about. Of course, maybe I’m not really one to talk since I never really explored the band much outside of the singles I heard on the Punk-O-Rama compilations way back when. I also have to admit that whenever their songs do cycle around, I always first think that they are The Living End. But no, that’s just my dumb brain being dumb. And that’s even after seeing them – Tiger Army- at a Warped Tour concert! Once! A long damn time ago!

So in the last Shuffle post, Everlast appeared through one of his more recent albums. Well, like a bad penny (haha) he’s shown up again, only this time, it’s thanks to Whitey Ford Sings the Blues, a masterful album with one fine song after another. “Get Down” is a showcase of a song that features his known brand of bluesy hip-hop. I cannot even tell you how many times I listened to this album when it first came out. It’s truly a favorite, even to this day. 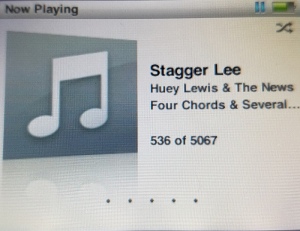 I. LOVE. Huey Lewis and the News. I’ve loved them since I first heard “Do You Believe in Love” on the Top 40 radio. And I still love them despite aural missteps like Small World and Soulsville. Four Chords & Several Years Ago is a cover album of 1950s and 1960s R&B staples, like the famously catchy “Stagger Lee,” which the band does justice.

P. S. This is THE best album to have on while doing chores around the house. Just sayin’.

This song I already covered in an iTunes Diary entry, so I have no desire to rehash things here. However, one thing I didn’t emphasize in that post is just how much this song stuck out from the soundtrack of Tony Hawk’s American Wasteland. Thanks to my husband, I spent most of the early to mid 2000s listening to the soundtracks of various Tony Hawk games, and American Wasteland was something different. It was more diverse, more broad, and more compelling as a result. I mean, it was still rooted in loud, aggressive punk, but there are definite outliers on it, such as Del Tha Funky Homosapien, Oingo Boingo, and as we have here, the Scissor Sisters, which defies you to groove with “Filthy/Gorgeous.”