Happy 4th o’ July to any who maybe celebrating such festivities today! Of course, if you’re celebrating then you probably aren’t reading, so…here I am again likely typing into a vacuum.  Of course, what is blogging really, other than talking to oneself? Not that there’s anything wrong with that. I mean, for one, it’s therapeutic. And two…

Speaking of celebrating, which we were speaking of before I got off track and then back on again thanks to a lovely alcoholic beverage, it’s that time of year when I play the “fifteen songs” game with my iPod. You know how it goes (not that anyone but me as an iPod anymore…) — put the thing on shuffle then glowingly or embarrassingly list the first fifteen songs that appear. As I’ve done in the past, I’ll offer a few words about the first five songs and then links to the remaining ten. So if you’re chilling with me here, go ahead and get yourself a tasty drink and prepare for some musical randomness! 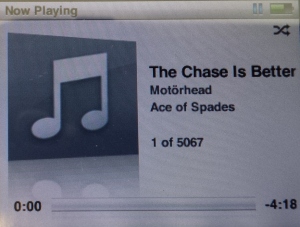 Whenever I play Red Dead Redemption, I invoke this particular album in part. Not only does the cover art reflect the outlaw spirit of Motörhead itself, but the sounds that emanate from this work speak to a rebel who can’t quite find right. That’s John Marston. Though his nature isn’t exactly reflect in this particular song “The Chase is Better than the Catch,” that theme remains prominent in the game. I do have to say, however, that in terms of band’s obligation to churn out songs about getting it on with whatever persuasion one favors, this songs isn’t one of the better ones. Thankfully, the driving guitar numbs the lyrics a bit.

I would guess that for many folks, De La Soul doesn’t go much farther than “Me, Myself and I.” And that’s fine; that’s a great song. It wasn’t until many years after that hit that I heard the entirety of 3 Feet High and Rising. It is a beast of an album, chock full of lyrical madness, from “The Magic Number” to “Jenifa Taught Me.” “Do as De La Does” is something of an oddball interlude, but it’s fun and quirky.

Exit Planet Dust is an incredible album. Like, even if you think you hate electronic music, breakbeat music, or anything originating from Manchester, England, you should still listen to this album at least once. It’s amazingly cohesive, intricate, and soulful. It’s one of those albums that marks a time of departures and new beginnings for me, and every time I listen to it, I’m transported back to a gorgeous and exciting halcyon era. “In Dust We Trust” is just one brilliant component here of an utterly transformative whole. 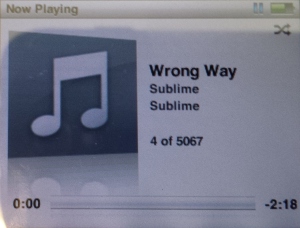 I love Sublime. While I’m no longer in the business of looking for rare albums, one-offs, and strange cuts, Sublime is one of the few artists for whom I have all of their regular releases and live albums. Granted, the catalog isn’t all that large, thanks in no part to lead singer Bradley Nowell’s untimely demise, but it remains a favorite, always. “Wrong Way” from their self-titled 1996 album is a mad scientist of a song — twisted and dark — that somehow made it onto the radio. Brilliant song, and one of Sublime’s more raw offerings, but the subject matter isn’t exactly…pleasant. 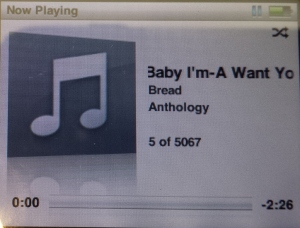 Well now…this is a…departure, huh? I’ve spoken of it before, and I’ll speak of it again – I really enjoy me some 1970s adult contemporary. It’s what I grew up hearing, and it’s become ingrained. It took me long time to be able to admit to this affection, and now, I don’t give a good goddamn what anyone thinks. “Baby I’m-A Want You” is one of Bread’s better known hits — it’s sweet and easy-going on the ears, and it makes me happy. This is the music that soothes when times call from something less gritty and more fluffy.

And here are songs six through fifteen:

Well good people, my drink is just about empty, so I’m heading off for a refill. Enjoy your day and some good music while you’re at it!