What goes around, comes around, and sometimes it’s another blog award!

Tis a glorious Monday, is it not? Well…actually, it’s not. I mean, it is Monday after all, and ain’t nobody got time for that. Except Monday. Monday has got all the damn time in the world. What do I got? Er…have? Oh, nothin’ much, ‘cept…another blog award! I’m probably past the statute of Internet limitations (HA!) in terms of acceptance, but the way life as been rolling around lately, it’s a wonder that I can keep track of anything at all.

And boy oh boy, am I blathering on way too much. (This is Monday at work, no doubt.) Ahem. I would like to pass on my most hearty of thanks to InvaderC8 of the blog by the same name, which, as it brims perfectly with all things games and movies, should absolutely be on your blogrolls, for bestowing upon this site the Creative Blogger award. Shall we move along with the rules of acceptance? I think we shall. 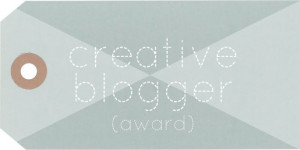 Alright. Well, first, other nominations. Hmm, we’ll see how many nominations I can manage by the end of the post. Second, thanks and linking — done! (Thank you again, InvaderC8!). So that brings up to the third bullet…five facts, huh?

1. I have a wonky relationship with watermelon. I hate the way it smells (especially when I have to cut it up…omfg how that funky sweet/green smell just lingers) and usually avoid eating it. However, I can manage watermelon in the following forms, and only if I don’t have to prepare it myself: grilled, dried, and laced with vodka.

2. I have not been able to watch Star Wars, Episodes 1, 2, and 3 since first seeing each of them in the theater years ago. I’ve heard repeatedly that I really should watch them again (as well as the original trilogy) in order to get prepared for Episode 7. And…I can’t. I just can’t.
2a. Speaking of Star Wars, Episode 7, I do want to see it, but I’ve stayed away from all news and videos concerning it. I want to go into that movie knowing as little as possible.

3.  As much as I love animals, since I’ve been gardening, I’ve come to despise squirrels, gophers, racoons, and some birds because of the havoc they wreak with the plants. Guess who’s not growing corn and sunflowers this year? 😦

4. Despite surviving a multitude of work schedules over the years, I’ve always been a morning person. If I were king of the world, my ideal (8-hour) work schedule would be from 6am to 2pm.

5. At heart, I’m a positive cynic. I do my best to be uplifting and maintain a positive attitude towards life and humanity, but I still can’t help but think it’s all for naught, because people are people. And that will never change.

Ah, there’s nothing like ripping apart the real from the “Internet persona.” For what it’s worth, hopefully all that was entertaining enough with the understanding that behind a blog, any blog, is a physical concoction of flesh and blood and some sense of human-ness. You spend enough time in the Internet, and it’s easy to forget that. So…having already passed along a number of blog awards to other deserving folks over the years, I’m going use this “nominations” space for my own, personal use. If you don’t care of continue to follow along from here, then by all means, please be on your way with glad tidings.

First, this year marks the second anniversary of United We Game. I really can’t express enough gratitude to my co-admins there: Hatm0nster and The Duck of Indeed, for allowing me to be a part of the site. To all of you who follow us there, have contributed to the site, and helped it grow by sharing UWG’s content, thank you. It cannot be said enough that without all the support from the blogosphere and those who stick with us through social media, UWG would not be where it is today. We’re continually working there to make things better, but it’s not always been easy considering that we all have to deal with real life. From the start, the goal of UWG was to help connect gamers and game bloggers, and we’ve not lost site of that mission. If you’d like to share your content with the site, or become a contributor of original game-related articles, we’d love to have you.

Second, if you would, kind people of the Interwebs, please turn your attention to the Bravo Mike Bravo Show. Earlier this year, I discovered that a good friend of mine from the ancient past had started up a radio show/podcast. As an avid podcast listener (I swear, some days they are the only things that keep me going at work), I first kicked myself for not finding out about this sooner, and second, I tuned in. Blake (the host), Carter (the co-host), and their band of merry rogues did not disappoint as they conversed about and skewered our beautiful culture at-large. And the best thing about the show is that listening is for a good cause! As the show grows, a percentage of its proceeds will be donated to alleviate veteran homelessness, as Blake and Carter are both veterans themselves. So please, if you have a spare hour or two that require a little vocal goodness in your ears, head to the Bravo Mike Bravo Show, where you can access the show directly, indirectly through other sites (iTunes, Spreaker, Soundcloud, etc.), and connect with the guys through social media (like Twitter @BravoMikeBravo). I promise that a good time will be had by all.