Looking back on my childhood, it’s hard for me to believe that my parents allowed as many computer games into the house as they did.  Yes, we had several consoles over the years, but the number of games we had for them paled in comparison to the stacks upon stacks of games on those ancient  5 ¼” floppy discs we had for our computer (not to mention the cassettes we had for the TRS-80).

I don’t remember being completely glued to a computer screen during my middle/high school years – my parents made us go outside, do chores, be social, etc. – but I did sink many an hour into a host of ubiquitous games, such as  Frogger, Centipede, Asteroids, Space Invaders, Breakout, Donkey Kong, Pac-Man, and Q-Bert.  And I played them mostly by myself.

Now I didn’t grow up in the sticks, but my little hometown didn’t have an arcade or any large outlet where arcade machines might be present, like a bowling alley or a skating rink.  There was no place for gamers to gather. But, pathetic as it might sound, I wasn’t a terribly forthright child so most of my friends didn’t know I liked playing video games, and probably never would.  But I was okay with that.  I liked that video games were my thing — my thing to do to relax, let off steam, and have fun.  And I liked that I always had the high score and that there was no pressure to compete.

But, I couldn’t spend my whole life trying to outdo my high score in Frogger, right?  I had to progress at gaming in some respect.  Once my siblings were old enough to play games, I became more competitive and more eager to show off my gaming chops, at least among my family members.  Our multi-player was relegated to consoles – I don’t recall that either my sister or brother were into computer gaming as much as me during those early years, though we all played on and occasionally fought for control of the PC.  As much as DOOM threw me headlong into computer gaming, paving the way to it were two titles that nurtured my moderately competitive spirit: Double Dragon (1987 or 1988) and Duke Nukem (1991).

For many years, every Christmas we received a package of assorted items from my one of my uncles.  He was into two things: trade shows and computers.   He was often nice(?) enough to send us some of the fun trade show stuff he had gathered.  One year we all got knock-off Walkmans; another we got hairbrushes and manicure sets; and still another time we each got giant tubs (sealed, thankfully) of flavored popcorn.

But since he was also into computers, he usually threw in several games (adding the aforementioned number of floppies and cassettes).  One year, he sent both Double Dragon and Duke Nukem, and I subsequently had a great winter break.

You love Double Dragon; you hate Double Dragon.  Either way, you’ve heard of it – the fateful tale of two twin fighters and their efforts to save the women they love.  The game has been ported and remade many times over several decades, but the basic mechanics have remained the same – beat up various bad guys through a variety of levels.  The controls were simple – punch, kick, move forward, move backwards – and the graphics were standard for the era, colorful and pixilated.  The game was also very addictive.  There’s no denying that some of the most addictive games are some of the simplest – Asteroids was nothing but a bunch of lines and angles, yet the primal urge to survive drove players to the brink.  The same of true of Double Dragon – you wanted to make it through one level just so you could get to the next level, and the next, proving your badassery along the way.  Did I want to save the double dragon’s girlfriend?  Sure.  But I also wanted to keep getting better at fighting and perfecting my timing and abilities (something that’s now all but lost on my aging self it seems).  Double Dragon didn’t have any puzzles to solve and there were no moral choices to make – you kicked ass and saved the girl.

(Thanks TigerClawTV for bringing back some happy memories.)

Continuing in that same realm with different means was Duke Nukem.  Before he was all into strippers, aliens, and general dickery, he was a humble platformer.   In his first entry into the gaming world, Duke’s goal was to stop the evil Dr. Proton and his evil army of robots.  The game took place in space and on earth and was set in the future of 1997 (OMG, LOL, haha, etc.)  You, as Duke, scrolled your way through various levels, shooting bad guys with a laser gun, and collecting items.  What I thought was pretty cool about the game was that some levels scrolled up and down in addition to side to side, so Duke also got to be an explorer in addition to a badass.  And though the game wasn’t puzzle-y, some items were tricky to find or get to, so you had to have your wits about you in order to find necessary power-ups, weapons upgrades, and such.  In addition, there were occasional interactive elements, like toggling switches and activating levers, all to make something happen.  The graphics were 8-bit and blocky with vivid colors and the level designs were pretty expansive.  Granted, the whole thing doesn’t sound  like much by today’s standards, but evolution has to start somewhere, right?

Duke was also…well, he was a sarcastic bugger.  Having a video game character “speak” his mind like they (Stallone, Segal, Van Damme, and so forth) did in the movies was something new and fun.   Who else but Duke could deliver such cheeky retorts as: 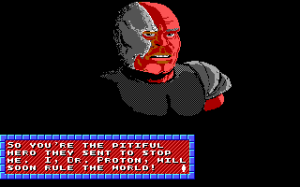 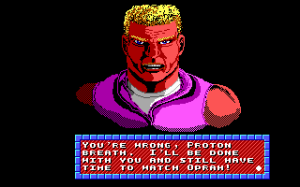 Okay, so Duke Nukem wasn’t going to win any daytime Emmys, but these coversations between scrolling and shooting were pretty funny.  And they helped propel the player into the story.  Shoot, I wanted to progress in the game just to read more of Duke and Dr. Proton’s interchanges!  The game gave me a compelling reason to stick with it – storytelling (a stretch, but still), better weapons, more items, more badassery!  I wanted to beat the game and save the world, and I wanted to become a better gamer. 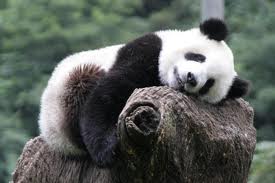 (Okay, maybe I just wanted to show a picture of a panda. But I bet not even crass ol’ Duke or the twin fighters could give that super cuddly face the cold shoulder.)